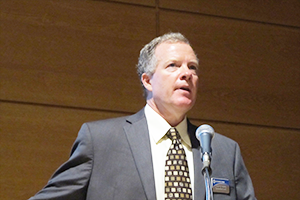 Scott earned a B.S. degree in Chemistry from the University of Minnesota in 1982, he went on to graduate school at The University of North Carolina in Chapel Hill where he received his Ph.D. in Analytical Chemistry in 1986 under the direction of Professor Richard Linton.  His dissertation was on the development of microcomputer based digital imaging system for extending SIMS to 3D elemental analysis of materials.

Upon graduation, he joined British Petroleum in Ohio as team leader of the Surface Analysis Group.  At BP America he used Auger, XPS, and SIMS to study ceramics, catalysts, polymers, and minerals.  He left BP at the end of 1993 to join Physical Electronics to work on the commercialization of the first PHI TOF-SIMS.  In 2008 he was appointed Vice President and then in 2010 promoted to President of PHI responsible for all US operations.  Over the past 30 years Scott has published 50 peer reviewed papers and made numerous presentations at both national and international conferences.